Stefani Joanne Angelina Germanotta, known professionally as Lady Gaga, is an American singer, songwriter, and actress. She is known for her consistent image reinventions and versatility in both music and entertainment. Having sold 124 million records as of 2014, Gaga is one of the world's best-selling music artists and the fourth highest-earning female musician of the 2010s. Her achievements include various Guinness World Records, 11 Grammy Awards, and awards from the Songwriters Hall of Fame and the Council of Fashion Designers of America. She has been declared Billboard's Artist of the Year and Woman of the Year and included among Forbes' power and earnings rankings. Gaga was ranked number four on VH1's Greatest Women in Music in 2012 and second on Time's 2011 readers' poll of the most influential people of the past ten years.

Lady Gaga is a new fragrance brand. Designer Lady Gaga has 2 perfumes in our database. Its latest perfume was launched in 2014. 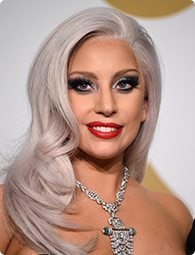